Journal on Science Engagement No. 4

I am glad to greet all the members of MILSET big family on the pages of
another issue of our JOSE magazine. This issue is dedicated to a remarkable
event: 30-year anniversary of MILSET, and it opens with an article by Rafael
Flores Hernández Xalapa. He described in it a wide sight on the last 30 years’ events
in World’s Science and Technology, having shown the logic of appearance
and development of MILSET in their context. Creating the organization and
conducting international exhibitions had a long prehistory and, I think, it has
grown on post-colonial space as a result of reconsidering by, firstly, French
intelligentsia the human aspects of collaboration between the youth of Europe and
other parts of the world. Both in those times and nowadays the Movement has
been holden by incredible personalities, enthusiasts, who have persistently been
turning dreams into reality. Derek Grey, the founder of the South African National
Expo for Young Scientists is an outstanding example of a person of MILSET’s
formation. He is the person, who the traditional “From the history of MILSET”
column, held by Ksenia Salnikova, is dedicated to in this issue.

Since the last issue of the magazine, MILSET has been into several memorable
events. MILSET community is now reconsidering its part in the world. The
strategical development, which defines the Movement’s priority DEVELOPMENT
directions, is being discussed. That is the topic of the article by MILSET bureau
member Reno Barlow who has headed this work.

In his article Monsefrises a very important subject of extremism in the
world of nowadays and notes the input of MILSET and other social organisms
in involving youth into Science and Technology as the most important tool to
develop a common understanding between different countries’ citizens and
representatives of different religions.

One of the most promising ways to involve youth in Science and Technology
and creating international project teams is science camps. The experience of
such camps’ organization in Russia and Dutchland is described in the article by
Yeppe and Dmitry.

The «best practice» section also includes information about EXPO SCIENCES
Vostok and recommendations based on the analysis of its results.

Also in the section of the STEM presents information about the projects of
Foundation for Glocal Science Initiatives in India by Anuj Sinha.

The world swiftly changes, we are facing new challenges of time. And we see
our friendly international MILSET family cooperate for stability in the world and
head youth towards high ideals of leisure in Science and Technology. 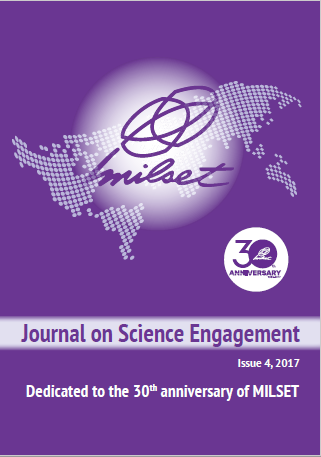