Journal on Science Engagement No. 5

We offer you the fifth issue of JOSE – the Journal on Science Engagement. JOSE is the main print publication of MILSET. Its main tasks are to unite all the members of our movement, telling them about the priorities, history and events in MILSET, and presenting interesting projects and methods of science education on different continents. Today, the world is global and people in different  countries involved in the popularization of science and youth scientific creativity face similar problems. Therefore, it is important to collaborate on how to resolve them.

There have been many interesting events in MILSET since the last issue. There were the traditional MILSET Regional Expo-Sciences, which were held last year in Chile, South Korea, Poland, and Yakutia (Russia), MILSET Young Citizens Conferences, Leaders Congresses, Science Camps and many others. We now have the MILSET Expo-Sciences International standards that will help ensure continuity in the organisation and the quality of future ESI events. Regional Expo-Sciences standards should be ready by the end of the year. The Executive Committee has completed a major review of the MILSET Statutes and Internal Rules. A modern vision of governance will soon be in place, improving our development and management of member organizations, governing bodies and regional offices.

MILSET’s main priorities have been reconfirmed: the popularization of science and technology; the non-competitive nature of its events; and stimulation of communication between young people from different countries. The MILSET family unites youth and adults regardless of nationality, political views and religious affiliation on the basis of work in the field of scientific and technical creativity and integration of the arts. Also, we launched a new MILSET web site and online registration system. In this issue, we present the most interesting materials from different countries and continents.

An article by Driss Louaradi (Morocco) describes the prospects for science education development in Africa. William Suarez Fernandez (Colombia) tells about the promising experience of Research Incubators as a platform for the development of research abilities in students. Vasily Pavlov (Yakutia, Russia) talks about a grand event - the International Intellectual Games, which were held last year in Yakutia. He analyses game as a model of cooperation and scientific education of young people. Our regular author Jeppe Willads Petersen (Denmark) presents an article in the classical scientific style. He writes about an original method for organizing project work in a scientific camp (using the example of the 11th International Research School) conducting research into the social connections between the participants.

Juan Manuel Padilla (Argentina) tells about the life and tragic death of his father, Enrique Padilla, who was a founding director of MILSET and contributed significantly to the development of the organization – the reason that the Enrique Padilla Award is so valued within MILSET. The issue concludes with an article by Zuzanna Ziajko (Poland) who describes the process of organizing a regional Expo-sciences using Expo Sciences Europe 2018 in Gdynia as an example. The Editorial Board hopes that after reading the materials of this issue you will have a richer understanding of the ideas of MILSET and of the people who implement these ideas around the world.

I also invite all of you to become authors of articles for the next issue! 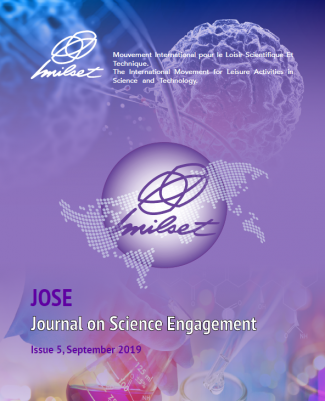